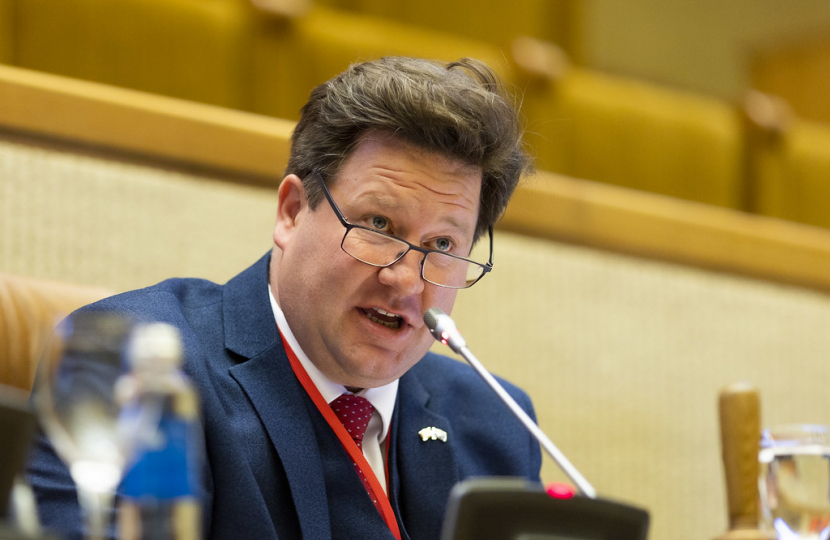 "At the NATO Parliamentary Assembly, we are currently pre-occupied with the war in Ukraine and the pressing need to export the 20 million tonnes of grain that is currently held at Ukrainian sea ports in the Black Sea. Around 1.5 million tonnes of this can be moved by train if a continuous operation was in place, but this would come at a high price as rail freight is much more expensive than sea freight, resulting in further inflationary pressures. Globally, 8 percent of wheat exports come from Ukraine, 13 per cent of corn exports and 33 percent of sunflower oil. Crucially, 43 per cent of all corn used in the UK comes from Ukraine. We are now in a narrow window to export last year’s harvest out of Ukraine before this year’s crop comes in. If we fail in this task, the simple reality is that the poorest countries in the world will starve, and we will see further food inflation at home on a level that could be limitless.

In the NATO Assembly, my conversations are now focussing on the possible need to put together a Joint Expeditionary Force of Naval vessels, potentially made up from the Royal Navy, allies and non-NATO allies, to escort the grain out of Ukraine. This would be a dangerous task and we must be prepared that we may need to engage in lethal defensive force against the Russian Naval sea blockade. This would certainly run the risk of escalating the war in Europe, and a high risk of death to British service personnel serving in any Joint Expeditionary Force. If we do not properly consider such a mission, then I believe we risk hyper-inflation on food prices at home, and starvation in the third world which will undoubtedly lead to yet further influxes of refugees into Europe. The Prime Minister and his Ministers are in daily meetings about the war in Ukraine and the critical global food crisis, and this corporate memory about the intricacies of the UK’s involvement, and his diplomatic relationships, are critical in trying to find a peaceful solution to getting the grain out of Ukraine and onto the tables of families across the world.

This matters to me because it affects my constituents in Elmet & Rothwell.

I can tell you candidly, from leadership roles I hold in the NATO Assembly, that our international partners say that the Prime Minister has personally been at the forefront of the global response to the war in Ukraine, not least with his early intervention via military aid and robust economic sanctions; indeed, in his own address to the House of Commons, President Zelenskyy said: “Thank you Boris for the leadership! Historical leadership. I'm sure of it.”

Instability in UK leadership would be a gift to Putin and his brutal invasion in Europe, as well as his attempt to destabilise global markets. International solidarity is important in times of conflict and whilst some in the UK may disagree, the view internationally is that Boris Johnson is at the forefront of the global response. Furthermore, constituents I speak to in my weekly street and supermarket surgeries tell me, above all else, they want the Government to be working flat out to help with the cost-of-living crisis, as the Government recently addressed with a £37 billion package to support families across the UK.

I do not seek to downplay the genuine anger and dissatisfaction caused by the various events and subsequent investigations by the Met Police and the Cabinet Office which have now concluded. However, with an international view, I have weighed up the domestic attention on events in Westminster which took place two years ago with the current global threat facing my constituents in Elmet & Rothwell and the country at large.

On the specifics of the events in question, we have had over six months of rumour and speculation and we now have facts provided by the Met Police and the Cabinet Office. Back in December 2021, rumour and speculation was such that we were led to believe that senior Ministers in Government were implicated in numerus illegal events in Downing Street (of which I was disgusted to hear rumours of at the time). However, the facts remains that the Met Police thoroughly investigated these issues and found that - notwithstanding separate events involving civil servants in Downing Street whilst the Prime Minister was not present - the Prime Minister himself should receive a single Fixed Penalty Notice for receiving a birthday cake in the Cabinet Room between meetings on the wider COVID response. Incidentally, the Head of the Civil Service, Sir Simon Case, who was also present at this meeting, did not receive a Fixed Penalty Notice. Meanwhile, the Leader of the Opposition, The Rt Hon. Sir Keir Starmer PC KCB QC MP, is now also under investigation by Durham Police for a similar alleged breach of COVID regulations for attending a beer and curry event with Labour activists.

As I have already outlined to my constituents publicly, I personally followed COVID rules to the letter of the law and it is somewhat an anathema to me that senior politicians of all parties – and civil servants - have found themselves implicated in a situation in which their own conduct has been called into question. However, when I consider the international situation, I simply do not believe that the United Kingdom is best served by the Conservative Party's indulgence in a protracted leadership election at a time when the Prime Minister’s leadership is being relied upon internationally."

Leader of the UK Delegation to the NATO Parliamentary Assembly.

Who should be the next Prime Minister of the United Kingdom?

There will soon be a new Prime Minister to serve our country.

Tell us your views by answering this one question: “Who do you think the next Prime Minister should be?”